We Want Skirt as Part Of NYSC Uniform- Group Protest

Serve With Skirts Movement, an advocacy group on Wednesday, stage a peaceful protest at the Unity Fountain in Abuja to demand inclusion of skirts as part of the uniform for the National Youth Service Corps (NYSC).

Members of the group, comprising of young boys and girls, held banners with inscriptions like “there is a difference between the world and the daughters of God”, “We cannot dress like the world”, “our sisters cannot dress like men. They should be decently covered”, among others, with some of the female members dressed in Khaki skirts.

According to them, year after year, female corps members are harassed at orientation camps for refusing to wear skirts. This, they said, is a breach of their fundamental human rights under Section 38(1) of the constitution of the Federal Republic of Nigeria.

A leader of the group, Udochi Emmanuel, said the use of trousers are evoking immorality in the camps. In the 1970s and 1980s, she said, “we had our mothers wearing skirts and we want to go back to that.”

“We have asked for exemption (sic) severally. NYSC has not given that as an option, they have made it a compulsory one-year service for everyone below the age of 30 and they are mandated to wear those clothes.

“We have already started negotiations (with government) and we hope that from this dialogue we will get a favourable response,” she said.

When asked if don’t they get what they are seeking for Ms Emmanuel said they “may need to ask for redress in the court.”

A corps member, Patience Noble, who was part of the protest, told journalists that she was posted to Ebonyi State for service and when she insisted on wearing skirt, she was asked to leave camp.

“As a citizen of my country, I have the right to serve the nation just like every other graduate has. They insisted that I wear this trouser or leave the camp. During the camp there were lots of insults and humiliation – one of military tore the skirts I was wearing on my body.”

The protest comes barely two months after two members of the 2019 NYSC Stream C in Ebonyi State, were sent home from camp for refusing to wear trousers.

The NYSC spokesperson in the state, Ngozi Ukwuoma, explained that when the duo were accosted and interrogated, they disclosed that they could not wear the white shorts and the trousers given to them by the NYSC since it was against their faith.

Efforts were, however, made by the office of the Camp Director to make them see reason why they must obey the rules and regulations guiding the orientation and NYSC, but all efforts to do that were futile, she said.

This act generated controversy among Nigerians as many were torn between allowing skirt as part of the NYSC uniform or not.

Although the NYSC act does not clearly state what the uniform should be, it only said the corps members should accept and wear whatever is given to them.

Section 3(1)(ix) of the NYSC bye-laws states that every corps member shall “wear the various uniforms provided for the activities.”

It also says “any member who refuses, fails or neglects to comply with this rule shall be tried by the Camp Court and, if found guilty, be liable to be decamped and sent out of the orientation camp.”

The Senate had in March 2018, rejected a bill to amend the National Youth Service Corps (NYSC) Act.

The bill was rejected following concerns that such amendment requires altering the constitution which requires a longer process.

Officials of the NYSC have, however, continued to admonish corps members to adhere to the laws of the Corps. 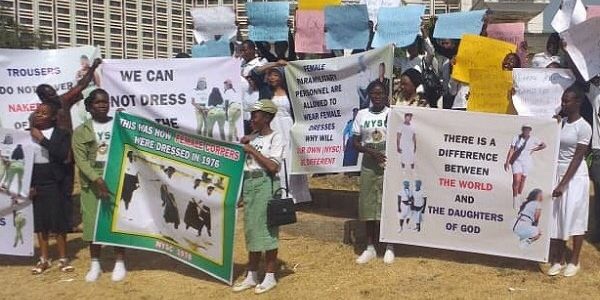 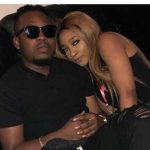 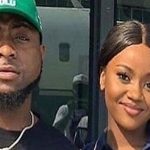