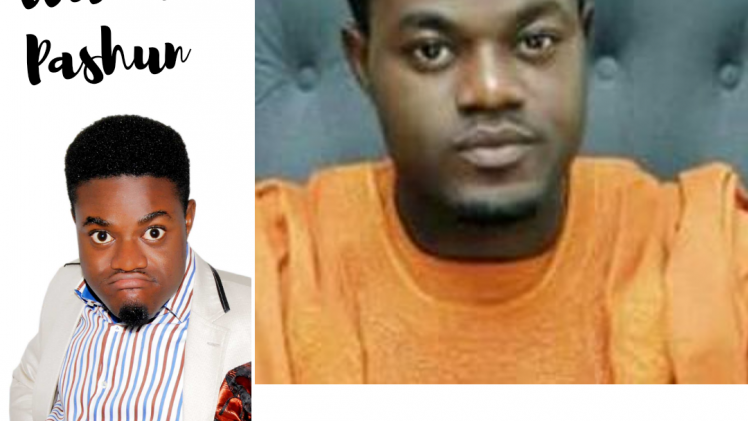 This week we have comedian and actor Mc Pashun answering our 25 QUESTIONS.
And it was quite entertaining.
You’ve seen him on Flatmates playing the role of Titus and we’re certain you’d like to know more about him.
Yeah we know. You’re welcome.
Have an entertaining read as you read on.
1: What are your real names? How did you come up with your brand  name Mc Pashun?

Real name Diribe Chidi Richard, The brand name Pashun came 2006 when I was watching a soap opera that end with a song “You are the fire burning inside of me, you are my passion for life!  I knew it’s Comedy talking to me so I adopted the name  Passion and changed spelling to Pashun. 2: We watch you play the role Titus on flatmates, but Who really is Mc Pashun?  Where are you from?  What schools did you attend?  How old are you?

Pashun was made in August 19,1985. Attended David Savage Pry school Orile, Ajangbadi high sch Okoko and Studied Psychology in. University of Uyo.. Titus is a crazy subconscious part of Pashun which has a mix of childhren and adult behavior display of an Igbo boy which saw limelight when I was discovered by Basket Mouth.

It Began in Secondary school, I was always called upon to say anything in Jet Club to make people laugh, even when I don’t have “a joke” I used reality issues around the school to crack them up. I became a Comedian by Condition.

4: How did you get the role Titus and what’s it like working with the cast and crew of flatmates so far? Castin of My Flatmates is Spiritual ,everyone colonized their character. I was Called to play the character Titus as a day player and things turned around and it became a permanent role and with consistency I carved a niche for my character in my talking and attitude.
My Flatmates is more than a production now, it’s a family as most of us are stand up comedians, and they assist me in sharpening my career beyond set. The crew members are the real MVP’s, na them blow us.

5:  Now tell us about your acting and comedy CAREER – The story behind your Journey to fame.

It’s has been stand up comedy and compering event all the way from 2008 in my little way till I saw the positive side of consistency . After Nysc 2013, I did a research on how to grow in my career, I realized that visiting comedy clubs to stamp my name in the heart of other comedians. De Don was the Comedian that gave me fame and acceptance amongst Comedians as I visited his clubs back to back to brush up my Talent. Also, sourcing for acting opportunities ,radio and TV shows helped alot in my career speed as I became a supporting OAP On Comedy Happy with De Don on Rainbow fm ,Comedy Runs on Star till I joined my  flatmates .

6:  How would you describe the influence of social media on your career?

Social media is a huge deliverance to many entertainers.  It really helped me in getting closer to my fans and clients,especially Instagram and watsapp.

7:  Who would you say are your influences in the comedy world? I was greatly influenced  the Kings of Nigerian Comedy, in no particular order, the likes of  Alibaba, Basket Mouth ,Gandoki, Okay Bakassi, Julius Agwu to mention a few. They taught me what Nigeria Comedy looks like and I  tried to shape myself to build my own brand. Amongst all Ezegburugburu1, Basket Mouth  has influenced me more  within 2yrs  he adopted me as a son.

8:  Motivation is important with Comedy; what would you say is your motivator currently?  And how do you remain focused within a role?

What motivates me is house rent, my mum well being, wife to be and what to keep for unborn kids so that they won’t for beg for 3k on social media. These thoughts drive me.

9:  Thinking about your career to date; what has been your greatest achievement as a comedian/actor?

Great achievements…. Being on Africa’s No 1 Comedy Series My Flatmates playing a very stupid unique character  and also being on A-list events  Like Boss Buchi Comedy’s Finest, Lords of the Ribs with Basket Mouth and more. I love the shock on the faces on my fans when they see I’m funny beyond  sitcom.

10:  Did your family and friends try to talk you out of comedy? And how do you balance work and your personal life

Family wanted me to work after university, the conventional way of survival, but too bad, ministry of work is now stranded, they have no work for even their kids again as usual. As family knew I intend monetizing sense of humor which runs in the family, they let me be and wished me well.

10 yrs time, I see myself among the top 5 of Nigeria’s most created comedians and hopefully by then the structure of Comedy would have been golden.

12:  In Nigeria; Who are your favorite comedian’s?  & Favourite International Comedian’s?

FAVOURITE actors to work with, would be?  In Nigeria… Basket Mouth, Okey Bakassi, Buchi, Senator, De Don, igosave, Dan D’humorous, Acapella, Destalker to mention a few. International… Kelvin Hart, Micheal Blackson, Eddie Grieffin, Eddie Murphy, I would love to act the serious side of me , will love to work with Genevieve, Omolola, Jim Iyke Omoni Oboli and more.

13: If you were to choose between Stand-up comedy and acting what would it be?

Stand Up Comedy, that’s the godfather of all my talents

14: What should we expect from you in 2019, any underground projects? More acting deals?

A Comedy show plan still is pipeline, it will soon burst in 2seconds, all man will hear, fans are asking, so I think it’s time to give them their request

15: What is one of your more embarrassing memories from childhood?

The day caterers refused to give me food in wedding  because of wet lips I rubbed, saying  I want to eat two times. I cried all the way home.

17: What do you like doing in your spare time?

I’m a phone addict, only a well talked about film can make me look TV, I read issues online till I get a creative spark .

18: Who is your celebrity crush?

They are all married now, can’t crush on mum with Shildren, abi u want me to say Omotola and mercy Johnson

19: your favourite song at the moment 20: What are some things that sound like compliments but are actually insults?

Life dey sweet you, When will u have time to see me, you are now too successful 21: Have you ever dealt with performance anxiety

Yeah, when I’m called to perform immediately  after a person has a standing ovation ,Its like  going  to fight principalities and power for the first 3mins because just like the dead, his remains is still on that stage. But I’ve defeated that spirit after I became better in my game. Now I can perform  after anybody.

22: If you could wake up tomorrow in the body of someone else, who would you pick and what would you do?

Basket Mouth… I will first go and collect 1 billion loan from bank with the face.

23; what’s the weirdest thing about you.

What I can’t do in real life, I do at  ease in movies.

24: What does creativity mean to you?

What creativity means to me as a comedian is knowing that 2face cannot perform with Burna Boy CD. That’s where the word Create came in. Allowing your thought to give you content that makes you original.

25: What is one goal you are determined to achieve in your lifetime?

Supporting to raise kids with quality vocational training from primary school. It will cause a lot of independency at early of the the lives of the kids.

Hope you had fun reading this INTERVIEW as much as we did bringing it to you.
Fan of MC Pashun and his art? Follow him on IG @iammcpashun
You can as well follow us @glancemagng.
Are you a budding writer? Want to sharpen your writing skills? 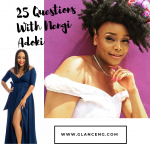 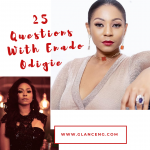