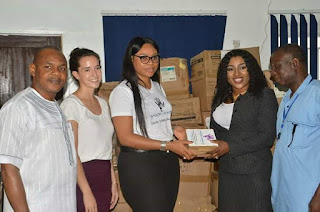 Cross River State Primary Health Care Development Agency yesterday 17th November, 2017 received a major boost in her fight against Monkey Pox Epidemics. It also received some equipments like thermometers and medical consumables like Gloves cotton wool Iodine, spirit etc which will be used to boast health  services across the state. As part of school health, they have received 500 sanitary pads from AIDS Healthcare Foundation for young girls in rural areas to improve menstrual Hygiene of young girls. 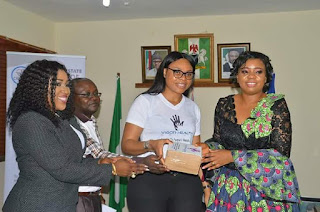 Commissioner for Health, Dr Inyang Asibong in her remarks while ceremoniously receiving the support which will boast Health services in the state, commended Vigor health Drive for supporting the State with over 150 cartoons of medical supplies that will boost the fight against the deadly Monkey Pox disease.

She said this is just the beginning of the positive collaborations between Cross River State and Vigor Health.According to her Cross River State is the only State in the whole of South South that does not have a confirmed case of Monkey Pox epidemics and this is due to the preventive culture of the State against disease outbreak.

Director General of Cross River State Primary Healthcare Development Agency, Dr Betta Edu who received the sanitary pad and medical equipment/ consumables with the commissioner, said the donor’s primary objectives for giving out this consumables is because she saw the huge unmet needs in Africa, Nigeria which she felt she must meet. I also contacted her on the monkey pox and need to equip our PHC workers to work safely in communities and be prepared to tackle outbreaks  of Monkey Pox or even laser fever in the communities. 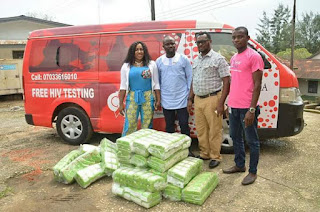 ” The Governor of Cross River State, Senator ( Prof) Ben Ayade is very pleased about your support to the State in a time everyone is vigilant about the deadly laser fever and Monkey Pox Epidemic.

Presenting the items to the Honorable Commissioner and the DG CRSPHCDA, Mrs Stephanie Nnamchi said she is very happy to be in Cross River State and the core reason behind her gesture is that God call her to do it.

According to her bringing solution to the need of people at the community level is the core reason they brought this protective consumables equipment etc for doctors and  health workers. She said health workers should first be protected before rendering services to the patients.

Finally she urged them to utilize it perfectly well as she will do more in due course to salvage the situation in her country.

In a similar news, the DG Dr Betta Edu had earlier received over 500 sanitary pads from AIDS Healthcare Foundation aimed at empowering and supporting young girls while developing their capacity and leadership skills.

She said the support will go along way to deal with these abnormalities in communities and prepare young girls for future tasks ahead.

Previous Story:
Mr P GIVES FAN AN EARLY CHRISTMAS GIFT | DROPS NEW SINGLE ‘FOR MY HEAD’
Next Story:
BE THE NEXT FACE OF GLANCE! | JOIN IN THE SOCIAL MEDIA CONTEST.