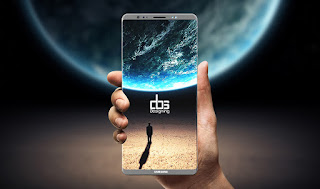 Samsung obviously have a lot to prove with its Galaxy Note 8. Which is the first new addition to the Note range of smartphones since the Galaxy Note 7 was pulled from store shelves last year following a number of reports of handsets catching fire and exploding.
Should we say its brave for Samsung to continue using the Note brand, after such a high-profile fail.

But the company is out fighting and proving us wrong with a multimedia powerhouse of a smartphone, taking design cues from the award-winning Galaxy S8 and combining them with the power and functionality of previous Galaxy Note devices.

Though the New Note8 still in it’s early days, is yet to have complains of overheating,

Samsung has implemented a new eight-point battery safety test, in an attempt to make sure history doesn’t repeat itself. 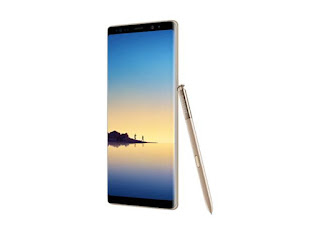 HERE IS A DETAILED REVIEW OF THE SAMSUNG GALAXY NOTE 8.

The Galaxy Note 8 is very similar in appearance to the Galaxy S8+, and only a fraction bigger, with a 6.3-inch Super AMOLED screen as opposed to a 6.2-inch one on the S8+.

As with the S8 and S8+, the Note 8 boasts an “Infinity” display, which means the interactive part of the screen stretches almost to the edges of the device, with extremely narrow bezels around the edge.

The corners on the Note 8’s display are more angular than those on the S8, and the glass doesn’t curve at the edges in the same way, but it is still an extremely attractive device.

The “Quad HD+” display, which is certified as “Mobile HDR Premium”, serves up sharp images and eye-popping colours, making the most of the larger screen space.

The all-glass body makes it a little slippery to hold, and it does pick up fingerprints easily, but both of these problems can be solved by putting a case on the phone.

As with the S8, the fingerprint reader is positioned high up on the back of the phone, which makes it difficult to reach when you’re holding the device with one hand. 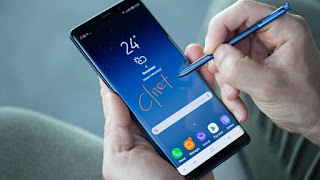 Luckily the Note 8 comes with a variety of authentication options, including an iris scanner and facial recognition, so you don’t have to rely solely on the fingerprint reader to unlock your phone.

The main difference between the S8 and the Note 8 is the inclusion of Samsung’s S Pen stylus, which makes it easier to draw, take notes, and mark up documents on the smartphone.

The Note 8 comes with a new and improved S Pen, which has a finer tip and is pressure-sensitive, letting you create more detailed effects.

It also has a number of features designed to take advantage of this, including “live messages”, which automatically turn hand-written messages into GIFs, and “Translate”, whereby you can highlight a section of text using the S Pen, and instantly translate it into another language.

You can also use the S Pen to scribble notes on the Note 8’s always-on display without unlocking the phone. These notes can then be saved to the phone or copied and pasted into other applications.

If you’re the kind of person who likes to use a stylus, this is undoubtedly the best smartphone you can get. The S Pen is smooth and comfortable to use, and thanks to the little slot in the bottom, you’re unlikely to lose it.

But if you’re used to manipulating touchscreens with your fingers, it takes a bit of getting used to – I had to keep reminding myself that some tasks, like taking screenshots, really are easier with a stylus.

The Note 8 is Samsung’s first smartphone with a dual-lens camera, bringing it into line with Apple’s iPhone 7 Plus.

The 12-megapixel sensor on the Galaxy S8 is no slouch, boasting an aperture of f/1.7 for capturing detailed photos in low-light conditions.

However, the Note 8 takes this to the next level, with one 12-megapixel wide-angle lens and one 12-megapixel telephoto lens, offering 2X optical zoom on top of the standard digital zoom. There’s also optical image stabilisation, to reduce accidental blur.

The dual camera lets you capture a depth-of-field effect, known as “bokeh”, whereby the subject of the photo is in focus and the background is blurred. This technique is often used by fashion photographers, to make the model appear as if they are popping out of the picture.

I compared the Note 8’s camera side-by-side with the iPhone 7 Plus’s dual lens camera, and it performed well, with lots of detail in photos even when zoomed in.

While pictures taken with the iPhone 7 Plus came out brighter, the colours captured by the Galaxy Note 8 were more true to life. 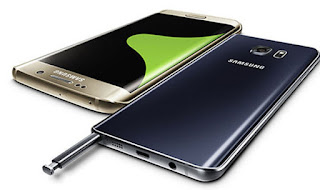 Best of all, with the Galaxy Note 8 you can adjust the level of blur in the background, even after the picture has been taken, giving you an opportunity to get artistic with your photos.

The model I tested was running Android 7.1.1 Nougat , but with Google recently announcing the release of Android 8.0 Oreo, you can expect an over-the-air update for the Note 8 fairly soon.

The large screen size makes the Note 8 well suited to multitasking, so you can watch a YouTube video on one half of the screen while replying to an email or browsing the web on the other, for example.

Whether or not you’ll find this feature useful depends on how you use your phone, but it’s something Apple is also bringing to iPhones with the release of iOS 11 later this month.

I personally find it a bit awkward to have lots of information crammed onto the screen at once – and it’s not like it takes long to switch between apps on Android – but applications may become better adapted to this format over time.

If there’s a particular combination of apps you find useful to having running side by side, you can create a shortcut and add it to the Note 8’s Edge panel for quick access.

Samsung’s virtual personal assistant Bixby made its debut on the Galaxy S8, but it was fairly underwhelming, as the company’s image recognition software, Bixby Vision, was the only AI technology enabled at the time.

There’s a dedicated Bixby button on the side of the Note 8, which you can press to call up the virtual assistant and then give it an instruction like “take a selfie”, “show me the last photo I took”, or “share this photo on Facebook”.

It can also be used to open web pages, scroll through them, set reminders and control smart home appliances.

In my tests it seemed to work pretty well. Integration with apps like Facebook makes it more useful than personal assistants that just act as voice-controlled search engines. I also prefer pressing a button to call up the assistant to using a wake word like “Alexa” or “OK Google”

You can create custom voice commands, which prompt the phone to carry out a sequence of actions, which is a nice touch. For example, you can use the command “good night” as a shortcut for “turn on ‘do-not-disturb’ mode, set an alarm for 6am and turn on blue light filter”.

Confusingly, the Note 8 also has Google Assistant built in, so you have to choose which personal assistant to use. Given that Assistant is better established, users may lean towards Google’s offering, but the dedicated Bixby button puts Samsung’s assistant within easy reach.

The Note 8 is a beautifully crafted smartphone that oozes sophistication. It offers everything the Galaxy S8 does, but with the added benefit of a smart stylus for when productivity is the order of the day, and a dual-lens camera to take your photography up a notch.

The £869 price tag will be pretty hard for most people to swallow, making it even more expensive than the 128GB iPhone 7 Plus – although the forthcoming iPhone 8 is rumoured to cost even more.

But for those with business accounts, or those who are happy to fork out for absolute top-of-the-range technology, this is likely to be high on the lust list.

Importantly, it shows that Samsung is capable of rising like a phoenix from ashes, stronger and even more ambitious than before.

The Samsung Galaxy Note 8 is available to pre-order now from the Samsung website , and also from selected operators and retailers
Credit – MIRROR

Previous Story:
TOP 5 ACCESSORIES EVERY MAN SHOULD HAVE
Next Story:
BEARD GANG : TAKING CARE OF YOUR BEARD