This is  a very heartbreaking story that got to us.  And we though to share. 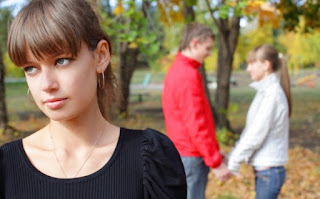 But what do this guys really want? Read Onome’s Story Below of how her 4 year old relationship went down the drain after her man or should we say… “SOME ONE SHE THOUGHT WAS HER MAN” Ended up putting a ring in another girls finger.

I met Samuel two days after my birthday, I went to buy eggs, it was around past six pm on 24th April 2013… He drove pass me and reversed, and we exchanged pleasantries and numbers… He called me two days later and we became friends but he kept asking me out but I said no because i was just healing from a broken relationship then…

Well after much percussion from his side, I gave in on August 27th and finally accepted to be his girlfriend….

The first few years were Rossy.  I was happy again after all.

Along the line,  I noticed a sudden display of affection on social media between him and some girl. Of course I confronted him, he went on defensive with the “we are just friends nothing more” phrase. He went on to add “She’ll be getting married soon any way,  you have nothing to be scared of”.

I let it go.  Now fast forward to  Dec 2016 I over heard him discussing over the phone with a lady and it was a sensitive issue…

So I asked if everything was okay and he opened up and told me it was about the other lady, which he met her after we started dating. He said he had plans of marrying the girl but his parents didn’t support the relationship.

This made me very upset and emotional and i bursted into tears because  I felt stupid..

Went back home at about past 11pm that day,  and I began to withdraw myself from Samuel.  Hoping for the best but expecting the worst.

I was uneasy,  upset and heartbroken.  Doe I saw it coming but I really did hope it was going to end well for us.  Because I loved Samuel.  I mean,  we’ve been together for years.

I called him and just said congrats Sam, I heard you engaged.  He went cold with a Sarcastic Thank you!

I asked who the lucky of unlucky  girl was and he said I should check his Facebook page that it’s a someone i don’t know.

I just went to his timeline on Facebook and saw it was the same girll we always had issues over..

Really?  I was the side chick all along?

We do hope that Onome feels better and ladies pls learn to be sensitive in a relationship.  Know where it’s going before it’s too late.

Want to share your story with us?
Email us your story and pour it all out.
Glancemagng@gmail.com

Previous Story:
TOP 10 BUSINESS QUOTES BY MO ABUDU AS SHE TURNS 53!
Next Story:
BETWEEN IPHONE X AND THE SAMSUNG GALAXY S8 | SPECIFICATIONS COMPARISON