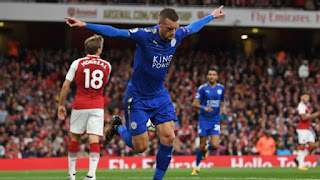 Leicester City Striker Jamie Vardy says he was right to have snubbed Arsenal when the FA cup champions came calling for his services at the emirates last season. The prolific striker said he had to think about it considering the performance of the Arsenal team lately. He said Arsenal has done well as a club to be in the European competition for almost 20 yrs but losing out this season and it says a   lot about them winning major trophies.

Arsenal has not had the best of years after winning the premier league 13 years ago and failing to beat Barcelona in the UEFA champions league in 2006. Though they have won FA cup in those periods,winning the prestigious title 3 times in 4 years,you will say it is not a bad result but Arsenal has seen themselves be the center of attention in recent years even after getting the likes of Alexis Sanchez and Mesut Ozil,the still found it difficult to clinch the premier league trophy.

Leicester City won the league in 2015/2016 after they took the title from Chelsea on Jose Mourinho’s return to England. Chelsea ended the season in 10th position after they could not defend the title. Leicester City saw themselves progressing in the champions league until Athletico Madrid rained on their parade at the knock out stages of the competition.

Arsenal and Leicester had to dig it out on the opening day of the league on 11/08/17 where Vardy scored twice and his team took the lead but it wasn’t for long as Olivier Giroud and Aaron Ramsey turned out to be the game changers,which saw Arsenal beat the former champions 4-3 in a very memorable night of football.

Vardy is not backing down on a move away from his present club as the 29 yr old says he wants to win trophies.

Previous Story:
Man City are considering taking legal actions against Javier Tebas after he accused the club of financial doping
Next Story:
Chelsea take another dig at Diego Costa after the club management ordered his Range Rover to be moved to the reserve team’s car park