Glance NG. Chats With One of Africa’s Most Creative Photographer – Weeshotit – Who Sets Model’s Ablaze For Photo Series –

Recently, we witnessed, an interesting photography series, put together by one of Africa’s most creative photographer. – Hyper Idoreyin Ekpa of the Weeshotit brand.
Aside the fact that, am quite acquainted with the creative director of the brand, and i have been opportune to witness his creativity at work, i would have,  of-course: doubted his recently concluded Fire and Water Series.
I mean, who plays with Fire? According to Fela, Water no get Enemy. But Fire? Hell No. And with Water, one can basically get drown.
But of-course Weeshotit, has proved to us that,  they don’t play by the rules.
Out of our own curiosity and for ya’all doubting Thomas’s, Glance NIG. had a quick chat with the Wizard behind the magical camera. Hyper Idy. We talked about his just concluded series, the risk involved and photography in general.
It was quite an interesting conversation, and am sure y’all will enjoy reading it. But before you go ahead to read….Lets take a look at the Images from the Fire and Water series, and the story behind each image. Enjoy! 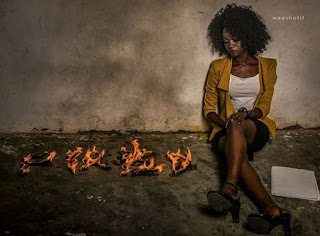 Donald trump would relate. I wonder why fire was used to describe this situation.
Model: Inyang Bassey 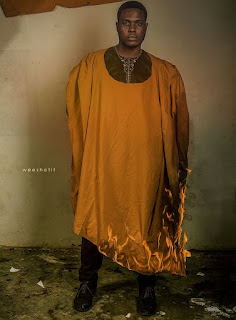 One of the scariest stunts we pulled in the name of photography. Once again, don’t don’t try this at home please (Real Fire)
Model: Immanuel Ebiti Ikpeme 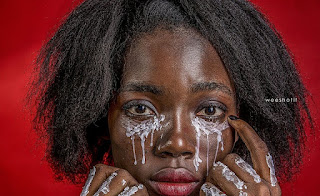 Sometimes we allow people burn up because we cannot see the flames. When we realise that the fire was burning from within all along, it’s usually too late!
Model: Rosemanuella Priest
Candle tears by: Immanuel Ebiti Ikpeme 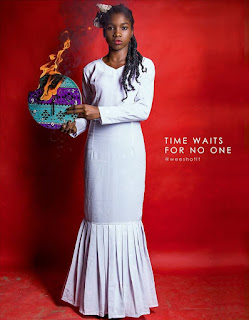 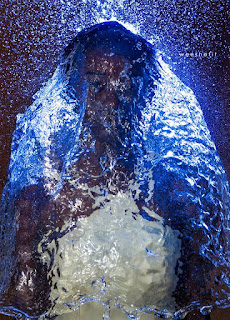 THE BRIDE: Wedding day attire has changed in many ways, but one component that has withstood the test of time is the wearing of a wedding veil. 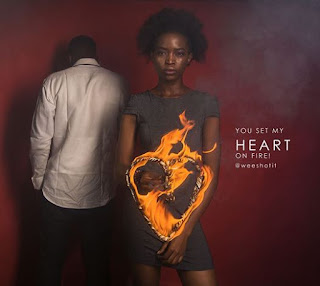 Have you ever set someone’s heart ablaze? We have.
Mercy Nkama and Moses Elijah 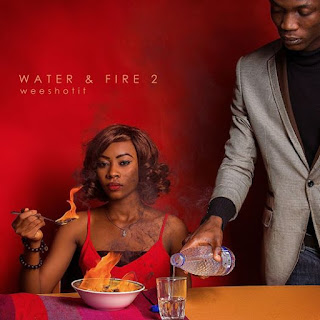 They said never play with fire.
We don’t follow the rules at WeeShotit Photography. 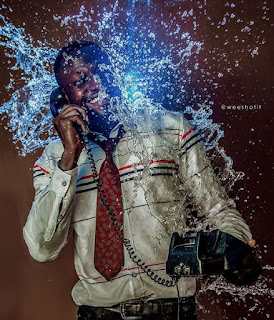 Stay Hydrated. Even at work. Latest studies show that dehydration reduces your efficiency at work by up to 30%.
Model: Ephraim Umoh 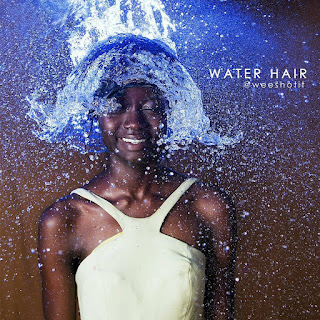 Women in #Africa do not joke with their hair. We don’t mind going hungry for a week to afford the latest weave-ons. We prefer the long European hair because that’s our definition of true beauty. At least that’s what the movies say. 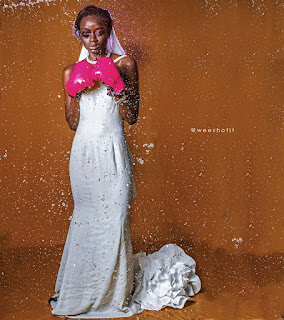 THE FEMINIST BRIDE:
Women have been through a lot of abuse and unfairness mostly from their male counterparts. This has led to many women in marriages making a decision to fight their husbands and men all over the world. A fight gone wrong. Though women have a genuine case many feminists have gone way overboard (especially in Nigeria) promoting hate between both sexes.
I believe that women can win this war with love and care
Model: Inyang Bassey 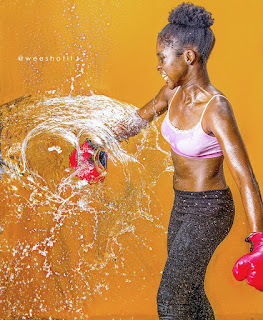 We all fight battles in our life, but picking the right battle is most important part of the fight!
.Model: Jossy Johnson 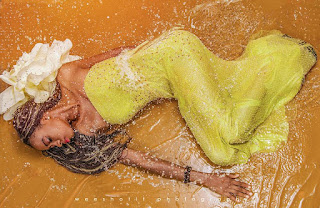 There’s nothing as tempting as a wet woman.
Model: Iberedem Etuk 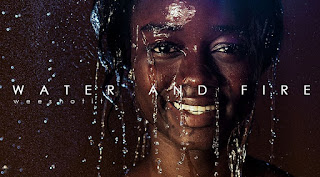 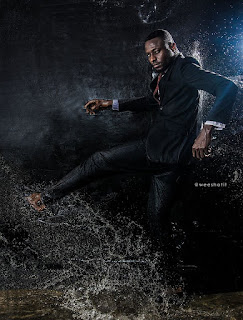 Water is the most important commodity on earth after air but it’s a luxury to many.
We need to ensure water is available to all.
Model: Ephraim Umoh 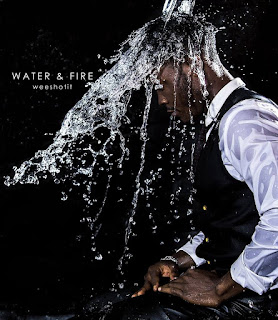 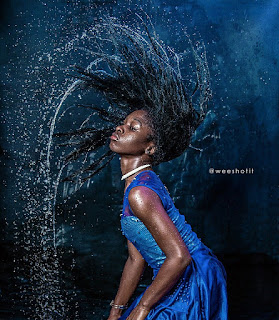 Water has no shape until you bend it!
Model: Jossy Johnson 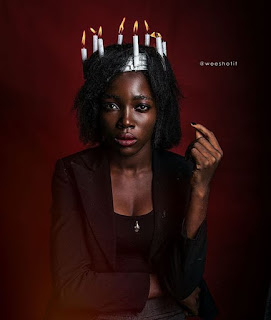 Queen of Blaze! A true queen is the one who works her way to the top.
This one is for you your majesty.
Model: Rosemanuella Priest 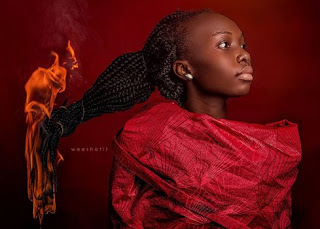 ALISHA KEYS sang “This girl is on fire” We brought those words to life.
I told this girl not to look terrified in the photo oh. But look at her face. Just because her hair is on fire. What’s there!?
PLS DONT TRY THIS WITHOUT PROFESSIONAL SUPERVISION! PLS!!!
Muse: Ruth 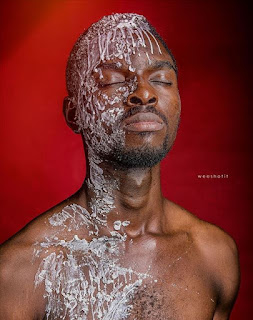 Now, you can go ahead to read our Exclusive chat with the brain behind -Weeshotit Photography.  Hyper Idy –

1: HOW IMPORTANT IS IT FOR A PHOTOGRAPHER TO CONNECT WITH HIS SUBJECT TO BRING OUT THEIR TRUE SELF?

HYPER – It’s quite critical. There is always so much tension when shooting so being able to connect with the subject on various levels helps reduce all that and also helps in easy communication and comprehension between both photographer and subjects leading to a smoother shoot.

2: WHEN YOU START OFF A SERIES, WHAT TO YOU AIM TO ACHIEVE? ECONOMICALLY AND INTELLECTUALLY.

HYPER – When we start a series we just want to have fun with what we do and hope that people stay connected to us. And Yeah,  Many other photographers in Calabar now make series too so definitely we are influencing how photography is done creatively in Calabar.
Beside, a lot of  people follow these series. So, i can say: It Creates more attention for the brand. So many people now want to be part of them. It’s just a show off of our ability to tell stories through photos like in the movies. Its actually a time for us to practice and try out new skills too. There is no direct economical impact.

3: ABOUT YOUR JUST CONCLUDED WATER AND FIRE SERIES: WHAT INSPIRED IT?

HYPER: I got the concept from a movie series and thought to myself. I could actually communicate a story through a set of photos.
We basically create a theme and do many shoots around that theme. And yeah, we have people waiting to see what comes next. We have been able to create that kind of anticipation when ever a series is on. One of my favorite series was the Easter Series “The pink Thorn” where we told the entire Easter story with just about six photos.
I’m an Adventure Camp Director too and so I know that the most important things you need are water, fire and shelter. Those three things would keep you alive in any situation. Water and Fire are one of the things we fear the most.
So the series was about conquering that fear and converting it to creativity.
We also wanted to do something challenging. Something never done in Nigeria. It was not easy but we are glad we achieved it.

4: WERE THERE ANY CASUALTIES?

HYPER: There was just a small burn on a model’s hand, you could barely see it. We ensured that all safety measures were taken before we started the shoot so we did not really have issues. There were people on standby to quench any fire. We also dis not use any electricity for the water shoot.

5: ARE ALL THESE PICTURES PURELY PHOTOGRAPHY OR WERE THERE DIGITALLY INFLUENCED?

HYPER: People have argued that we used photo shop to make the fire and water into the various shapes but they are wrong. These were intelligently planned and executed in real life. No effects were used. A behind the scenes video had to be put out before people started to appreciate all our effort. We shot in high speed to freeze the frames and get the water in motion. For the fire, we actually set the models ablaze in a controlled situation. We did many takes, many many takes. We got some and we failed in some. There were even some we gave up on and never got to publish.
So no, there was no special digital effects used during the series.

6: WHAT MAKES WEESHOTIT STAND OUT?

HYPER: Our zeal and effort to always be different makes us stand out. I mean you cannot stand out if you do the normal things. That’s more like blending in. We don’t want to blend in. More so we have a greatness mindset. We ensure quality in all our photos. We are not too keen about mass productions. We would rather make a single photo that is worth a thousand.
That’s why we go with the slogan – “Quality over Quantity”.

7: WHY DID YOU CHOOSES TO BUILD YOUR BRAND IN CALABAR?

HYPER: I was born and bred in Calabar.  This is home.
There are many great people from Calabar who have decided to go and be great somewhere else. Many photographers I know are moving out because of the perceived economic situation in the state. I however think that Calabar has what it takes to make any business really big if we can harness the hidden potentials in the state. I want to prove to the rest of the world that something GREAT can come out of Calabar. And we ARE doing that already. In my just concluded Weeshotit World Tour, I met a lot of people in over 12 cities within and outside Nigeria who wanted to know where I was based and I told them Calabar. Some where shocked and others promised to visit the city so we hope to continue to attract  such POSITIVE attention for Calabar and the state as a whole. Some people say it’s cos I’m avoiding the struggle in mega cities like Lagos. But they are ignorant because it’s a greater struggle surviving in a slow city like Calabar.  People actually leave Calabar because it’s harder to survive here than Lagos. I see a brighter future for our city.

8: ASIDE PHOTOGRAPHY: WHAT ARE YOUR OTHER TALENTS?

HYPER: Aside photography, I do camping. I love get-aways that’s why I run one of Nigeria’s most adventurous camps HCS CAMP. I am also a writer, a story TELLER, poems etc. Working on a book right now. And yeah, I rant on Facebook…. a lot. Also a life coach. I love karaoke so I do that as a hobby and I’m in the business of meeting new people. There are other things I do or can do but I won’t mention until I’m ready to do them.
Oh Well: There you have it. Hope you enjoyed reading our chats with the Creative Director of Weeshotit.

Previous Story:
Exclusive Chat With “This Is It” Star – Chy Leona
Next Story:
OAP INTERVIEW | LET’S TALK RADIO WITH THE QUEEN OF THE AIR-WAVES!