John Mikel Obi to lead the veterans as they return to the National team. 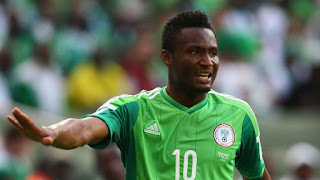 John Mikel Obi will lead the way as Victor Moses,Odion Ighalo and Leon Balogun are all set to return to the National team side after their absence. Mikel who has been out on injury for the past four months just made a recovery and his back to playing with his Chinese club Tianjin Teda.

His team mates like Victor Moses who has been injured as well made a remarkable come back for his side Chelsea against Tottenham in the Sunday derby at Wembley after  Chelsea’s disastrous opening game against Burnley in the opening match of the season for the team,which saw them lose 3-2.

Meanwhile,Odion Ighalo who also plays for Chinese side Chang Chun-Yatai is expected to come to camp when it opens. Ighalo left Watford in the English Premier League last season for the Chinese club after becoming the highest goal scorer for the team in two seasons.

Expected to make an appearance is Leon Balogun of FSV Mainz in Germany.