In Calabar; Man Mistakenly Kills Himself

When they say “Alcohol na bastard” Trust me,  it’s true.

On Thursday,  Calabar witnessed a tragic incident when one Mr.  Etebong Akpan (Not real Name) .  Bled to death. 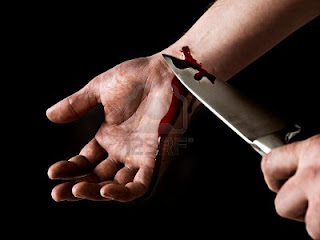 According to a eye Witnesses,  The father of 9,  was drinking at a local bar close to his home, in his drunken state he bragged about being able to break a bottle with his bare hand.

He was asked not to dare it,  as he was already drunk,  he went ahead to test his powers.  After about two tries,  he succeeded in breaking the bottle,  with the bottle also breaking him.

Unfortunately for him,  the bottle slashed through his wrist,  finding it’s way to his veins.

He bled Profusely,  as he tried to find his way back home,  he Slumped.

Before help could get to him,  he died.  As he had lost a large amount of blood.

He is survived by a young wife and 9 children.