Exclusive Chat With “This Is It” Star – Chy Leona

This is it Series is Back! And we are excited. 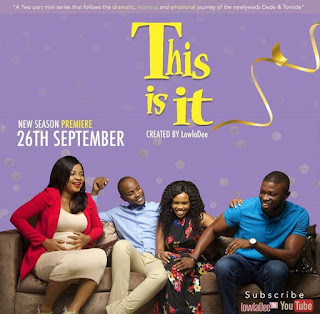 No doubt,  the Nigerian Series which follows the exciting and dramatic lives of some Young Newly Weds; won our hearts with its first, 10 Episodes. Most of us, who found the season one addictive, have been drooling for some Season 2 for so long. And we are excited to have our favorite series back.
If you had fun watching the season one, Brace up! For the season two promises to take you on a roller coaster ride.
Trust me when I say, The season two is a total package of FUN.
Of course, In Anticipation…. GLANCE NG had a chat with one of the Lead Stars “Chy Leona” who played the lead role. DEDE. She talked about her experience getting back on set to shoot the season two of This is it and what fans should expect in the new season.

1; You’ve been working on the Season two of This is it series. . What’s it like working with the cast and crew again?

It was like a family reunion! We had some new crew members and a few guest actors join us this season but they blended right in! We have an upbeat set and it tends to rub off on everyone. Never a dull moment! We would shoot late at night sometimes and when we start getting tired, we would burst into random dance sessions in between takes lol.

2; What’s going to surprise people about this season?

We see the growth of each character, especially Dede. There are many twists and turns this season but as always we promise to make you laugh, cry, dance, scream, and coo lol. It’s literally a rollercoaster ride! An exciting one!

3; Without giving anything away, what’s your favorite line of dialogue?

“From our lips to Gods ears”

4; Besides your Character (Dede) which character would blow people away?

Honestly Everyone stepped it up a notch this season, From Tee to Kerry Cherry to Sam and my 3 crazy “intrusive” friends (Ndidi, Folake and Tina) lol. We also had some guest stars (Olumide Oworu, Adaora Mbelu, Jemima Osunde, Ozzy Agu and much more) Trust me you guys are in for a ride! I don’t want to give too much away.

5; How do you prepare, to be able to bring the right amount of realism and emotion to a scene?

The first thing I do is read the script multiple times. Every time I read the script, I discover something new. After reading the script, I take note of all the characteristics that make up Dede based on what’s written, what others say about her and so on. Then I find the “Dede” within myself and work from there. Even while on set shooting, I was still discovering Dede. I just worked on BEING “Dede” instead of ACTING like a “Dede”. Even when the camera isn’t on, I still tried to maintain the character as much as I could that way when it did come on, it felt natural. THIS IS IT SEASON TWO PREMIERS ON 26TH SEPTEMBER.

DON’T MISS OUT ON THE FUN.

Previous Story:
PERFUMERY THE NEW OIL INDUSTRY? I MADE A MILLION NAIRA IN 3MONTHS – Adewale Aladejana
Next Story:
Glance NG. Chats With One of Africa’s Most Creative Photographer – Weeshotit – Who Sets Model’s Ablaze For Photo Series –