Critical Review of AY’s Movie – A TRIP TO JAMAICA 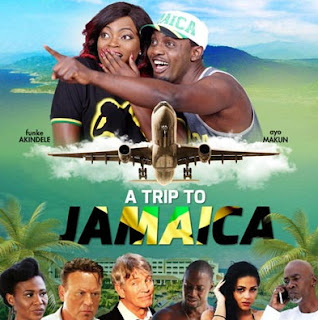 First,  i will like to advice Ayo Makun to quit script writing, he sucks at it. He mustn’t write all his movies.

Now,  let’s talk about one of his recent movie ” A TRIP TO JAMAICA”. In my opinion; it was a huge disappointment.
Though the Actors did their best to interpret and deliver the character’s, there are characters in the movie that were totally unnecessary,  bringing the actors interpretation to a flop.
This movie has one of the worst directing i have ever seen and if you know me well you’ll know i have seen a lot of movies.
There are scenes that were not well directed, such as Patoranking’s scene(he should never consider acting again by the way), the scene where Ay was on the tree, to the scene where he took over the gun and rescued himself and Abigail(Nse Ikpe-Etim) just to name a few
.
The script was so disjointed and confusing, since Akpos was the same guy that went to Atlanta in 30 days in Atlanta, they should have at least given us a hint about what went down between him and his love interest “Lynn Whitfield” considering the fact that she came back to Nigeria with him.
The flash of Abigail telling Bola about what her husband does for a living was a joke.
Secondly, the love story between Akpos and the Jamacian girl, Bola and the Jamacian guy wasn’t well written, it wasn’t convincing at all.  We understand it’s just a movie but it should at least be believable
There was no chemistry whatsoever between the characters.
Then the jokes, OMG, they weren’t funny at all, i sat there waiting to laugh my head off, waiting for the joke that will make me laugh till i choke on my snack but sadly, it never Happened 😞.
The title of the movie is a scam, Jamaica wasn’t well represented properly in the movie, ee won’t be wrong to think the movie wasn’t really shot in Jamaica, could have just been a built location somewhere in California, no Jamaican culture was displayed (at least they should have partied the Jamaican way), no notable or famous landmarks were displayed and no tourist site was visited by the characters, which kind trip be that one?
A trip to Jamaica had great potentials with fantastic actors like Funke Akindele, Nse Ikpe-Etim and Chris Attoh, good picture quality but it lacked a good storyline and thrills, had dull supporting actors and a bad ending. A trip to Jamaica was a complete waste of my time!
REVIEW BY; CHINWENDU SIOKWU FOR GLANCENG.