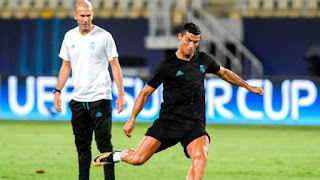 Real Madrid’striker Cristiano Ronaldo’s match ban has been upheld by the Spanish court which has said his match ban will stand and he will serve out the punishment after he pushed the referee in the first leg of the super cup tie between Real Madrid and Barcelona which ended 3-1 as Marco Asencio saw off the Catalans after Ronaldo’s exit.

Ronaldo,was shown a yellow after he took of his shirt while celebrating his team’s second goal which he scored to put them infront at the Santiago Bernabeu known as Madrid’s home soil. The second yellow came and it was a sending off as he was said to have dived in the penalty box of Barcelona. This infuriated him and he pushed the referee at the back after he was sent off.

The Spanish FA has issued the match ban after they got the official reports saying it was against their rule and he must be punished to serve as a deterrent to other players who wants to lay their hands on a referee in future.

Ronaldo,will serve a 5 match ban for that incident but will be available to play for his team on September 20 in a la liga clash against Real Betis.

Previous Story:
John Mikel Obi to lead the veterans as they return to the National team.
Next Story:
BREAKING NEWS: Zlatan Ibrahimovic pens a new Manchester united one year deal.