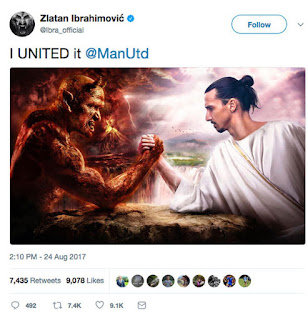 Zlatan Ibrahimovic has penned a new one year deal with Manchester united after his contract with the club expired in June. He has been battling to recover after his injury in a UEFA clash which saw him require surgery in the united states. He has done well in his road to recovery according to Manchester united boss Jose Mourinho.

The 35 year old Swede had scored 28 goals in 46 appearances for the team,making him the highest goal scorer in the team last season. His super excited to be back and cannot wait to train with his team mates.

He took a pay cut and was given the number 10 shirt as it was vacant and his number 9 shirt has been given by new signing Romelu Lukaku,who joined the club this summer in a 75 million euro deal. The number 10 was left behind by former highest goal scorer and skipper Wayne Rooney,who moved to his boyhood club Everton.

Zlatan,was due back on the pitch for January 2018 but his making a speedy recovery after the team allowed him to use their carrington facility. So he might end up coming back sooner than expected. According to him his due back by October 2017

Congratulations to the big man. Glad your making every second of your recovery count.