Antoine Griezmann gets a two match suspension for calling a ref ‘a chicken’. 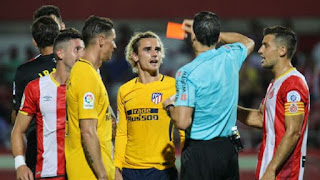 Athletico Madrid striker Antoine Griezmann has been handed a two game suspension for using an offensive words on the referee in game against newly promoted side Girona over the weekend which ended in a 2-2 draw.

The french forward saw a yellow first for a dive in the Girona penalty area,then immediately shown a second yellow by the referee for protesting the initial decision.

The referee Juan Martinez Munera’s official report states that the french international called him a “cajon” which translates as chicken.

Griezmann was fined 600 euros while his club Athletico was fined 700 euros.

Previous Story:
NEYMAR VS BARCELONA: Battle for the money
Next Story:
John Mikel Obi to lead the veterans as they return to the National team.