Jealous Boyfriend? – How to Make Him Not-So-Jealous By FBI 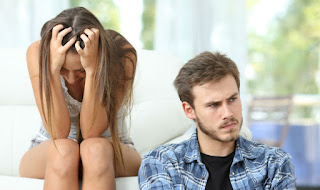 Nigerian Lawyer/Writer, Firsts Baba Isa shares relationship tips on how to turn your Jealous Lover to a Not so jealous Lover. Read and Learn!

Having a hard time dealing with a jealous boyfriend? If you’re sure your boyfriend is a keeper, here are ten steps to change him from jealous to not-so-jealous.


Dealing with a jealous boyfriend is rather difficult. And it’s actually a lot easier to just walk away from the relationship in the first place, instead of constantly having to remind him how much you love him.

But on the other hand, you may be misinterpreting his insecurity as jealousy. And it’s not easy to tell the difference.

If your boyfriend’s recently started to get quite jealous and possessive, or if you’re still in a new relationship and want to stop him from becoming jealous over time, use these ten tips to turn him from a jealous boyfriend to a reassured and happy one.

How to handle a jealous boyfriend
If you have a boyfriend who is jealous, and want to let him know that you really do love him and stop him from being so jealous, here’s all you need to know.

If you’re dating a happy guy who’s got a lot of friends and is quite popular, he may only be jealous because the relationship is still young or he’s still insecure about your feelings for him.

If you ever find your boyfriend questioning your interest in other guys or getting annoyed by your guy friends, perhaps you just need to let your jealous boyfriend know that you love him and no one else. And let him know that even if you do have a conversation with a male friend, it’s really not a setting for a romantic affair.

#9
Give him more attention around your guy friends.

Men are competitive, be it in a game or in love. If you’re dating a guy who’s jealous of your friends, it may just be his insecurity showing. If you do love him, the next time he’s with you and your male friends, give him more attention that you give to any other guy and he will love you for it. And he’ll definitely feel good about the relationship and be reassured too.

#8
Include him in the conversation as your savior.

Men have a protective instinct, and so does your guy. Your jealous boyfriend may feel threatened by other guys taking to you or flirting with you and may feel uncomfortable about it.

The next time a friend of yours tries to flirt with you or sweet talks with you when you’re with your boyfriend, pull your boyfriend closer by his arm in jest, and dramatically tell him you need “help with an annoying guy” or “his assistance in proving a point to your friend who’s bugging you.” By involving him when someone’s flirting with you, it would definitely reassure your jealous boyfriend and stop him from wondering if there’s something sneaky going on behind his back.

#7
Involve him in your social activities.

Jealous boyfriends can create epic fantasies and illusions in their mind when they’re feeling threatened. Every time you go out with your guy friends, he may end up brooding about what you’re doing, whom you’re flirting with or who’s pawing you. To make him feel better and stop spinning flirty tales in his head, try to involve him in your social activities for a few months. Let him realize by himself that you’re not on a flirting spree every time you go out with your own friends.

Jealous boyfriends are easily unsettled with the simplest scenarios. And it all starts and ends with you talking to other guys. It’s really annoying, but if you do want to help him lose the jealous streak, have him in your arms at all times when you’re hanging out with a group of friends. By “showing him off” when you’re around male friends, you’re be able to help him trust you and feel better, especially if you’re constantly giving him your attention.

#5
Call him often when you’re out with friends.
Jealous boyfriends suck! It’s a fact. But at times, by reassuring a jealous boyfriend that he has no reason to worry, you may be able to chisel out the perfect boyfriend in him. So as painful as it can seem, spend a couple of months trying these tips.

Your boyfriend may feel rather insecure and jealous when you go out with your friends and have a nice time. The only thing that goes on in his head would be, “does she have more fun with her friends than she does with me?” Perhaps it’s his insecurity or his fear of you having a better time with some other guy. But whatever the reason may be, one of the best ways to comfort his pacing jealous heart would be to call him often when you go out.

Call him every now and then and have a quiet conversation without getting disturbed by your friends’ giggles (which can annoy him further). It’ll make him realize how much you love him.

Indulging in public display of affection with your jealous boyfriend may make him uncomfortable, but he would still love it. By getting cuddly in public, either by holding his hands or kissing his cheek, you’re willing to let the world know that both of you are a couple. And that can be a huge reassurance for a jealous guy who’s always looking for little reasons to wonder if you really do love him.

#3
Tease him when you’re with your girlfriends.

Help your antisocial jealous boyfriend understand that a bit of fun flirting and teasing is all acceptable and harmless between friends and the opposite sex. Get your girlfriends to tease him a bit and flirt with him. It’s a bold move, but with the confidence of a few trusted girlfriends of yours, it’s a good way to make him understand how harmless a bit of flirting can be. So the next time he sees your male friends pulling your leg, he may take it in a lighten vein.

#2
Reassure him instead of getting angry.

Let’s face it, jealous guys are not the best boyfriends to have. But in almost all cases, a guy doesn’t become jealous unless he feels insecure or assumes you’re not really in love with him. Jealousy is actually a plea for help, and not a way to show off his domination over you. So if you ever find him sulking or sitting in corner and huffing and puffing, don’t get upset or angry with him. Instead, hold his face in your palms and remind him about how much you love him. You’ll see a big toothy grin popping out of his face in no time!

Being a jealous boyfriend is not something to be proud of. Your boyfriend knows that. But sometimes, it’s inevitable. So when you’re trying these moves, don’t let him know about it. It would insult him and make him feel worse. And he may close up further in his shell and would stop believing you, no matter what you do.

Should you date a jealous boyfriend?

Now all said and done, these ten steps on helping your jealous boyfriend will definitely work like a charm. But if it doesn’t, there’s probably a bigger reason for his jealous ways and there’s nothing more you can do to help him have a normal life.

So if these steps don’t work, I advise you to dump his sorry ass and walk out before he tries to keep you locked in a cage to make himself feel better. And if your guy ever uses physical force or stops you from being with your friends or meeting them, walk right out of his life and don’t even bother answering his calls.

Use these ten effective ways on changing your jealous boyfriend into a happy lover and see the difference. It definitely won’t fail, well, unless you’re dating a guy who’s messed in the head!

Previous Story:
DAMN SOCIETY AND ALL IT’S VICES – I AM NOW VERY SHAMELESS
Next Story:
WHEN LOVE RUNS OUT OF SHAPE, WHO IS TO BLAME? – A SINGLE MAN’S VIEW