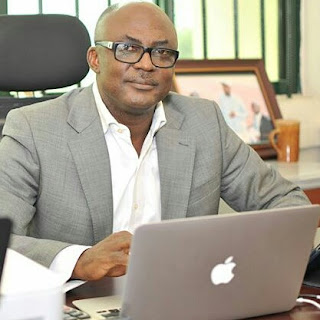 God fearing and endowed with a great depth of wisdom, a vetaran broadcaster and astute politician, Mr. Patrick Ugbe is the quintessential man who is admired by people from all walks of life because of his humble demeanor that reveals nothing about the strides and achievements he has recorded so far.He is the founder of Hit Fm, which is the first privately owned radio station in Cross River State. Mr. Ugbe is a gentleman and an entrepreneur who strongly believes in the power of passion and perseverance.

G.M: Can you tell us a bit about Patrick Ugbe?

P.U: I was born about fifty years ago, grew up and had my education between Obudu and Calabar, I did my National Youth Service in Lagos and started my broadcasting career with NTA2 Channel 5 Lagos. Sometime in the early 90’s, I returned to Cross River State to assist in the creation of a state owned Television station. Once again I left Cross River State in 1997 to Minage Television which was one of the first private broadcasting outfits to operate in Nigeria. I worked with Minage from 1997 to 1999 when some of my colleagues and I teamed up to set up our own private production outfit – the BBS Media.

I again returned home in 2007 when I received my first appointment to serve as the Chief Press Secretary / Special Assistant on Media to Senator Liyel Imoke, who was the governor at that time. Having served in that capacity for some years, I received another appointment, this time as the Commissioner for Information and during the second tenure of Senator Liyel Imoke, I was appointed Commissioner for Youths and Sports Development. I ventured deeper into politics by offering to serve my people but that didn’t materialize and I went back at the end of that tenure to into private business and that effort is what has now become Hit FM.

G.M:  You have served in the public service as a press secretary to the Governor during the Liyel Imoke administration, and a Commissioner for Information and Commissioner for Sports and Youth development respectively, would you say your experiences then, had a major role to play in your decision to establish of a radio station?

P.U: Well, I’ll say that my experience as a broadcaster encouraged me to set up this enterprise. I have always dreamt of owning a broadcast outfit, which was why my colleagues from Minage and I setup a broadcast production outfit as I earlier pointed out. That outfit was established with the sole aim of providing content to existing broadcast stations, deep inside of me, I still had that dream to own a broadcast outfit and that is what has happened here.

One of the most important skills an entrepreneur needs is passion. If you want to do something you are passionate about, you are likely to succeed at it, but if you’re not passionate about it, you’re just walking through, you will fall by the way side. A man who is passionate will be steadfast. It doesn’t mean that when you start, you will immediately succeed, a passionate person is the one who despite initial failure still believes, picks themselves up and forges on until they achieve success. Now apart from passion, a person also needs ideas.

G.M: What has been some of your failures/ setbacks, how did you pull through and what lessons did you learn from them?
P.U: What I do is, I don’t look back at my failures, I rather look forward at the positive things and look at the future, because I believe that, the future is bright, whatever setbacks (I don’t call them failures, I call them setbacks). Setbacks are there to make you stronger and keep you focused on your goal in life. Ermm a few time we’ve tried something’s, in my formal place “DBS Media” where we didn’t really achieve the result we wanted to achieve, those were setbacks, but it didn’t deter us, we forged on Until we achieved success, so basically for me, I’ll say that.

G.M: Why Calabar? What informed the location of HIT FM here in Calabar?

I come from Cross River State, there isn’t any private radio station in Cross River State. What is it in Cross River that’s not allowing private enterprises in the broadcast industry? I don’t think there’s anything that’s not allowing them fester here! For me, I’m serving my people, you may serve people in the public sector, even in the private sector, and you can still serve your people. So far, I am still serving my people.

G.M: Do you envisage any other radio station in the state as a threat or competitor for HIT FM?
P.U: Definitely! Every radio station is a threat, we are in business. It is not just in the radio station. Every business has competitors, and there are a threat because you’re not a monopoly. You’re sharing the market with them. So what you have to do is to constantly innovate and strategize to outperform your competitors, and that’s what for us at Hit FM are doing. We know that there are competitors, we acknowledge them, we know that there are also trying to outperform us. But we are constantly innovating, so we can outperform them and stay as a lead in this market.

G.M: How would you respond to competitors if they be any in the future?

P.U: I know that other private radio stations will come, the sky is so large that you see birds fly and their wings never touch, it’s a business, I am not afraid of competition, l like competition because it brings out the best in me, without competition you’ll be complaisant, you’ll just be offering anything. Because you’re a monopoly, but competition will make you. Like I keep using the word “innovative”.

G.M:  What is the reception of the State’s residents on HIT FM’s operations and programmes?
It’s been amazing! Hit FM has done a lot of things in Cross River State since its inception. People that never owned radio sets have bought radio sets, it has created business opportunities for people who deal on electronics. People who thought they never had a voice before, now have a voice. They have an opportunity to air their views, air their opinions on issues of national interest, issues that affect them, and that way you’re touching the people. Above all, it’s your providing an avenue of entertainment for the people. You’re providing them with entertainment, and I think we’ve done that successfully.

G.M: What makes HIT FM different from every other radio station in the state?

Well, I would have rather asked you that question, because you’re the listener. You listen to all, so you’re the ones that should tell us what stands us out from the others. But I think in a number of things from the brand itself. We’ve built a brand called HIT FM. A brand that resonates in the minds of the people, we have a brand that is strong enough to captivate and catch the attention of people and pull them away from where ever they were before to come and listen to Hit fm. Through our programming, our programming is unique! It takes care of everybody and it gives the listener an opportunity to also contribute, we are also reaching out to them through our events, events that we do that touch the people individually, so that in a nutshell stands us out from the others.

G.M: What’s your philosophy of life?

G.M: Would you describe HIT FM as your most fulfilling project so far?

G.M:  Is HIT FM involved in any charitable venture? Any future plans for such?

P.U: Yea! We’ve done quite a lot and there are some other projects we are planning. It depends on how you look at charitable ventures! Ermmm, Hit FM is privately owned, it’s for profit, but there are times that we have helped people, we’ve run things for people without people paying. And then some of the events we’ve done, like the mind rubbing section for instance which we had recently was one of such events that catered to that category as well and a number of other events.

G.M: Do you see HIT FM expanding towards establishing a TV Station?
P.U: We are taking one step at a time, so we can’t talk about that, at this moment… but let us ensure that we finish establishing Hit FM, take it to the next level before considering branching out.

G.M: The youths of our generation are only interested in the get rich quick schemes and are not prepared to work hard for success, what areas do you feel needs to be revisited, so as to give them a better sense of direction!

I think what the youth needs most is the change of values, the values they have now are wrong set of values. As u said, they want to come out from school, get into politics, make it, and drive a flashy car right from day one. It doesn’t happen that way, there is a developmental period for everyone. We see the likes of Dangote, Mark Zurkerberg, Bill Gates and so on! They didn’t just happen, it was a deliberate plan. They invested and they ensured that they nurtured their investment for them to become what they are today. You can’t come out of school and the next day believe that you’ll be like Dangote, it is impossible. It is the wrong set of values that could lead to that! That’s one. So they need to have role models, role models that they’ll look up to. Genuine role models, not the role models that may have made it through dubious means. The ones who have gone through the process of becoming what they are. They need to have such role models and they need to think more as entrepreneurs. You start small, you grow your business and become big that is a way for me to go for the youths.

G.M: Politics or entrepreneurship! Which is more fulfilling?

G.M: You seem to be a very busy man, how do you relax?

G.M: How do you combine your life as a father, a husband and an entrepreneur?

G.M:  How long have you been married?

P.U: I’ve been married for 14 years and I think I met her, erhmmmm…prior to when we actually married, some years before then as a friend before we started dating and got married.

G.M:  What, in your opinion are the secrets of a lasting relationship?

G.M:  Finally, for those who look up to you, what word of guidance would you give them to encourage them in the pursuit of their dreams!

P.U: Nothing good comes easy, you persevere. If you have a dream, don’t throw it away. If you believe in your dream, you must stay focused to work on that and ensure that you see to the success of your dreams.

Previous Story:
2Mins With Patrick Aneozeng of jorany Hotel
Next Story:
PERFUMERY THE NEW OIL INDUSTRY? I MADE A MILLION NAIRA IN 3MONTHS – Adewale Aladejana