A YALI Event for the Calabar Girl Child #calabar4her 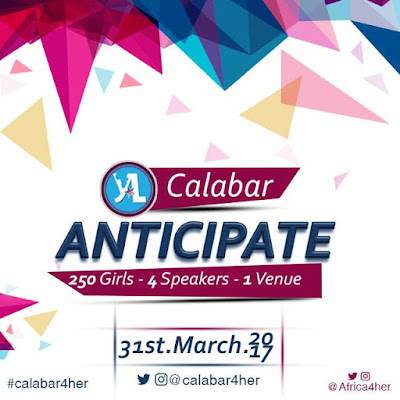 We as people are conformed to stereotypes, as we are so quick to judge people from their ethnicity. The girl child;

constantly looked down on and neglected, because they are supposedly; ‘weak or inferior’, has fought its way to recognition and a state of gratification, but how can this course be upheld? when a particular fraction of our female population is being judged by her state of origin. The average Calabar (Cross River) girl, is play out to be an object of sexual pleasure, even when there is no solid evidence backing up the assumption.

Here is, ‘CALABAR FOR HER‘; a project aimed at tackling the misconception surrounding women and girls from Calabar, urging the world not to see them through a particular eye, and also directed towards empowering, and inspiring young women and girls, helping them discover, develop, and deliver their abounding skills and potentials; to be self appreciative, intrinsically motivated, and have a healthy sense of value and self worth. The project which is driven at reaching more than 250 young people, is hosted under the ‘Young African Leaders Initiative (YALI) platform’. This maiden edition which is powered by; Enlightener’s Concept Initiative (ECI) and supported by; Noble Teens Initiative, CBN-SSEDC, the American Corner Calabar, and Glance Media Enterprise;is slated to stage on the 31st of March, 2017 in the city of Calabar.
You have heard it; think it, preach it , and live it. Lets endeavor to change our mindset, and abandon our primitive stereotype ways. Support this good course, let CALABAR be FOR HER.
For more inquiry, follow us;
Instagram: @calabar4her  @Africa4her
Twitter: @calabar4her  @Africa4her
#calabar4her
‘lets fight a good fight, lets be bold for change‘