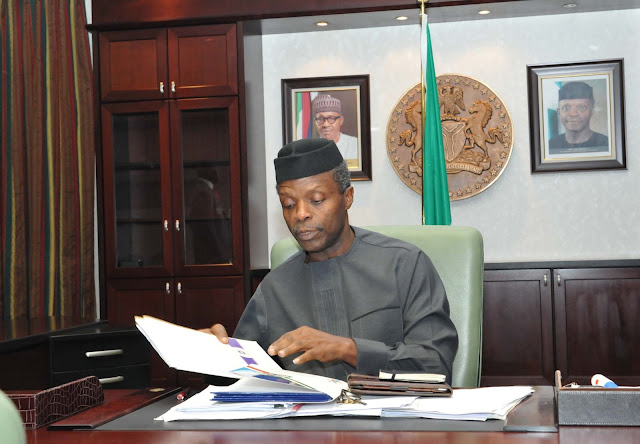 According to ThisDay, Vice President Osinbajo sent a letter to the Senate President, Bukola Saraki on Tuesday, February 7, 2017.
A lawmaker also confirmed that the Senate President received the letter requesting that Justice Walter Onnoghen be confirmed as the substantive Chief Justice of Nigeria (CJN).
The Senate however warned that it will not rubber stamp the appointment of the acting CJN.
He said

“The Senate President is in receipt of the letter from the acting president, but it will be left to Senator Saraki to reconvene plenary to start the screening process.But even if he does so, the presidency should not expect us to rubber stamp Justice Onnoghen’s nomination, as we would have to carry out our own background checks, investigation and screening before deciding whether to confirm him or not.”

Reports also say the challenge now, is that the Senate is on recess and Justice Onnoghen’s tenure as CJN will expire in some days.
According to ThisDay, only the National Judicial Council (NJC) can renew Onnoghen’s tenure as acting CJN. The NJC, which Onnoghen heads, is considering the option of recommending the acting CJN for another tenure, reports say.
According to an NJC source who spoke to newsmen;

“While serving in an acting capacity for the second time, the Senate will go about its business screening him at its own pace.”

Several groups and notable Nigerians had earlier called on the Federal Government to confirm the appointment of Justice Walter Onnoghen.
Source: Pulse NG

Previous Story:
Chris Sam appointed the Executive Director of A.Y.E in Cross River State.
Next Story:
Dear Late Eric Arubayi, I want to report Nigerians to you – One day too I will die and heaven will not fall. – Firsts Baba Isa