Dear Late Eric Arubayi, I want to report Nigerians to you – One day too I will die and heaven will not fall. – Firsts Baba Isa

I stumbled on this deep letter/tribute addressed to Late Eric Arubayi who passed on sometime last week. Eric  was a Gospel singer and a choir leader
at the HOTR Chapel in Lagos. He died after a brief illness which he treated with expired malaria drugs.

But typical of us Nigrians Eric was celebrated more after his death. With emotional tributes making rounds on social media. This is so sad.

Nigerian Lawyer and writer known as Firsts Baba Isa, has taken out time to write to Late Eric, reporting Nigerians.

Below is the keep letter/tribute he shared on his Facebook page. 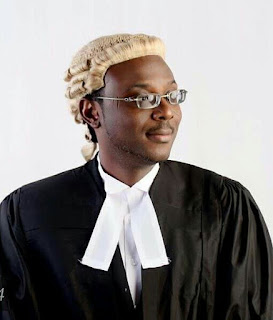 I want to report Nigerians to you.

Before your sudden death I didn’t even know you. Don’t blame me I’m not that vast music wise. As I grew older entertainment became one of those areas I focused less in in my reading. So maybe I missed you somewhere there in the many tabloids or entertainment gists I decided not to read. I might I have stumbled upon you and what you do somewhere. I can’t remember.

But when you died you became a super star, I found out you were a star already, but in death you became a sort of star that all manner of men, including non-music followers like me became aware of.

Our social media space was, is, flooded with your handsome face, the angelic faces of your wife and child, your videos, music and super stories of your heroic feats.

I see men and women, pastors and church members, sinners and saints using your pictures as dp’s on all social media platforms. They are mourning you en mass… These people who failed to celebrate you while you were here are now celebrating you in death.

How come none of these folks who are drooling over you now ever advertised you and your music? They allow you to die before the celebration began. Eric, you see our lives? We are a ramshackle, godforsaken bunch!

I’m here. No I don’t mean there… Where you are. I mean here, where you left. I’m here. Trying. Toiling. Tilling. They are watching. No one is saying anything. No one is advertising me or celebrating me. No one is giving me referrals.

One day I might crash in a blazing plane or drink expired drugs like you did. I will die. Then the adverts, the celebrations and the referrals will pour in. Then I will watch, in ghost mode, and can only cry: “O Thunder! Why have thou forsaken me???!!!”

Eric have you seen Dr David Jangkam? He died some days too after you. He was my level coordinator in the university of Jos. UNIJOS ASUU chairman. Postgraduate coordinator. He didn’t drink expired drugs like you. No. He collapsed. Home ball. Then the celebrations began.

My classmates and others put up his pictures everywhere and tell stories of the many Goliaths he slaughtered. We have never thanked him for once, ever. We just waited until he died.

Tell Doc I’m sorry for not celebrating him before he died. Tell him that since that day he called me “a first class material” I have never looked back. Tell him he is one of my heroes I never sang about. Tell him to forgive me if he likes, I don’t care. I won’t change anyways. I’m also a member of that unfortunate bunch of men with the proclivity to celebrate only what is dead!

We will all pretend for a while that you are missed but life will go on. It always does. One day too I will die and heaven will not fall.

And don’t pray for us… Forget that shit. If you can, weep for us. Weep!

My name is First Baba Isa, one day I will die just like everyone.