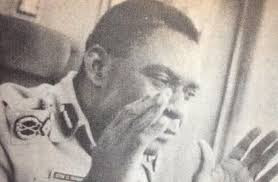 His death was confirmed by his family on Wednesday through a press release in Abuja. Mr Etim who was aged 85 is said to have died at the Reddington Hospital, Lagos.
Here is the statement released by his family, announcing his death. “We write to formally announce the call to Glory of our father, Sir Etim Okon Inyang, Inspector General of Police (retd) which event occurred at the Reddington Hospital, Lagos, on September 26, 2016.
“He was 85. He joined the Nigerian Police Force on October 1, 1949. He rose through the ranks, becoming Commissioner of Police in Kano and old Bendel States.

“In 1984, he was appointed Inspector General of Police and served meritoriously until his voluntary retirement in October 1986. He was appointed Vice Chairman of the Constitution Review Committee in 1987.

“He was conferred with the National Honour of Grand Commander of the Order of the Niger (GCON).”