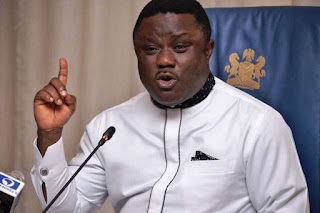 while many frown at street hawking and it being banned across the country, the governor of Cross River state, Senator Ben Ayade has a different view on the issue. In-fact he is ready to protect hawkers with all he has. According to him, the ban on street hawking as obtains in some states of the country constitutes the violation of the human rights of individuals who are denied the opportunity to make a living from that form of business.he continued to say, that the street hawkers are among the weakest in the society that require government protection.
While, addressing journalists in Calabar on Wednesday evening, Ayade said he has already forwarded a bill to the State House of Assembly to give legal strength to those who engage in the business of street hawking.
The aim of the law according to the governor, is to protect the rights of the down trodden and change the economic fortunes of poor households as well as bring dignity to Africa’s most populous form of trading.

Governor Ayade who disclosed this in Calabar, while signing the Homeland Security Service bill and eight others into law stated that: “Hawkers’ protection bill is one after my heart that I must ensure its enactment and implementation within the shortest possible time.”

In his words; “I have just sent the Hawkers’ Right Bill to the House of Assembly to provide a right for hawking.
“You cannot tell a man not to sell his goods because he does not have money to rent a store. And you tell the man not to steal? “Just provide a regulatory framework; there should be reflective outfits, there should be a minimum age of 18 to hawk. You will have a time frame when you come out so that you don’t constitute nuisance.
“But, to prohibit hawking is to tell a man I don’t want to give you food, and I don’t want you to steal. “It is unfair. They have right to seek and determine how they chose to live within the ambits of the law.
“Cross River would the first state that would officially recognize hawking.
“The core mandate of a leader should be the social security of his people. If a man chooses to hawk, if you are government that is sensitive and understands the real principle and objective of the law, then you will know that the hawker has a right.”